Skip to content
Posted on September 29, 2016May 17, 2018 by clebasemaj Posted in HanashTagged dayre-exported

It’s a rainy Thursday morning here, and a rainy morning equates to a disastrous commute. A normal P60-P90 Uberpool ride becomes P200 or more. I am used to walking from the condo to the office (if it’s not raining) and takes me only about 30 minutes. If it’s raining, I normally take Uber or Grab. These companies take advantage of the weather and surge their prices to the highest heavens so sometimes I wait for the little windows where the surge isn’t that high.

I was able to book an Uberpool ride earlier (pool is cheaper) and I was already waiting for the driver at 8am. I called the driver and he said he’s on his way already. 15 minutes passed and I see him moving around in circles (through the app); so I decided to call him again. He did not answer. Instead, I received an SMS asking me to cancel the trip because something’s wrong with his Waze app. I said no because I’ll be charged if I cancel. So, he had to do the cancellation.

And then I had to book another Uberpool ride – bear in mind that the rates were still surging. Luckily, I was able to catch the X3 of the regular fare, I was able to get a ride for P175. Damn. It’s the price of two full meals already (or three, depending on the store). I waited, yet again. And when the car came and I rode it, the driver clicked the +1 passenger button adding P10 more to my original fare. And then I was matched with a person who lives a little bit far from my place.

And then, the fcking driver turned the wrong way adding several minutes more to the already long trip to get to the other person. He blamed waze. And so it happened, an hour long trip from my place to the office and I was already very, very late (which by the way, is very, very rare).

I’m already in the office as of this moment (10:16am), but the driver has not yet finished the trip of the guy before me (in the app). It will be charging the guy I was carpooled with.

Why? Because something went wrong with the driver’s Uber App. I gave him P200 but I will definitely claim the P10 erroneous charge that he made because he clicked that +1 person. Plus, he gave me so much stress because I never wanted to be late. 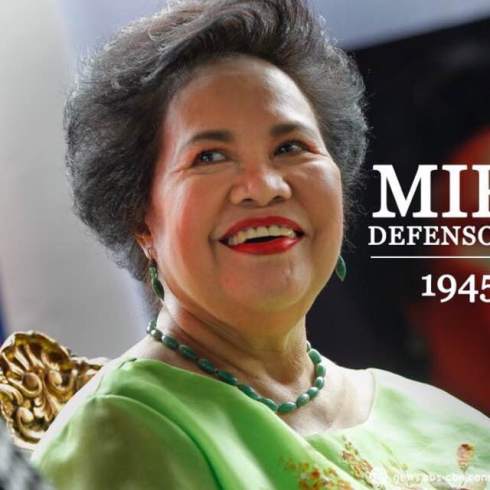 My President, my Senator – the best President that this country never had – passed away this morning. I mourn her death because I feel that the country has lost this leader, that we failed her in so many ways, that we don’t deserve to be ruled by this great person. I guess it was really never meant to be.

Miriam Defensor Santiago is a great stateswoman, she is Asia’s Iron Lady. I will never forget the day I met her, and I was just in awe. She was the person that this country needed.

But people always went for the popular choice, and clearly, she was not that. If she wasn’t cracking jokes or trying to make us laugh with pickup lines, people would call her crazy. It’s because her mind is that of a genius – only a select few would understand. Miriam is an acquired taste. She will always have my respect and admiration. May her memories forever live.

I met a guy. I talked to him, tried getting to know him better.. and he was very responsive. I would say that I assumed he was flirting back.

We talked about how he was still closeted to his family and friends, what he does, his interests.. and I realized, he never really asked about me. What I do, what I like, what I wanted from him.

So for a few days, I stopped talking to him.

It was also because of the fact that I learned that he was already in a relationship with someone else.

I don’t want to be the cause of a breakup or something – although it was clear to me that he was not interested.

And then a few days after I last talked to him, he sent me a message. He asked me how I’ve been doing. I did not reply immediately, so as not to show that I was very interested. After that exchange, we stopped talking (again). Three days after, I decided to ask him or at least squeeze it out of him. So I initiated a conversation, and I was leading him to the topic of a boyfriend.

But he never admitted anything. I continued, knowing that this is no longer right, until we both agreed to go out and see a movie on Sunday. Now I know that this is very wrong, but my judgment is already clouded with the desire of getting to know him a bit more. I’m on the #AngelinaJolie mindset and I felt that maybe I could get this one.

But God knows how far I would go with this one. Maybe I was just up for the challenge. I think of him and I don’t see us ending together.