Skip to content
Posted on August 6, 2016May 17, 2018 by clebasemaj Posted in rampaTagged dayre-exported

If you happen to be in Boracay, you must go and try the Boracay Pub Crawl. It has been my seventh time in the island, and my third time trying this out and I tell you this: it’s super fun and super worth it. Everytime I attend one, I gain at least one new friend (on Facebook, lol). 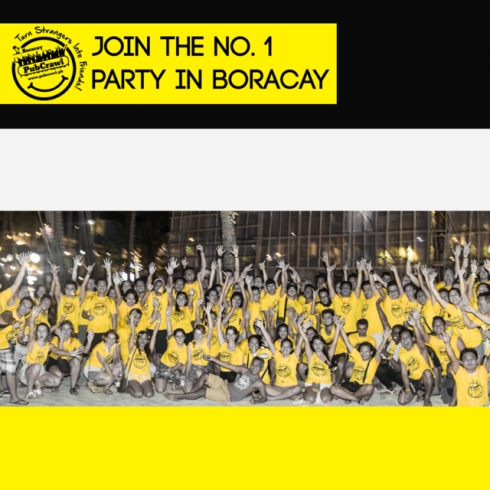 Google their site and they tell you that it is the number one party in Boracay. Boracay Pub Crawl is an “event” wherein you simply register – damage is P990, but if you register early it’ll be P690 for the girls and P790 for the guys. And then you will be given a free shirt – which you can cut and design in any way you want; and you have to show up at the meeting place at the specified time. This meeting place would be the first bar/stop. 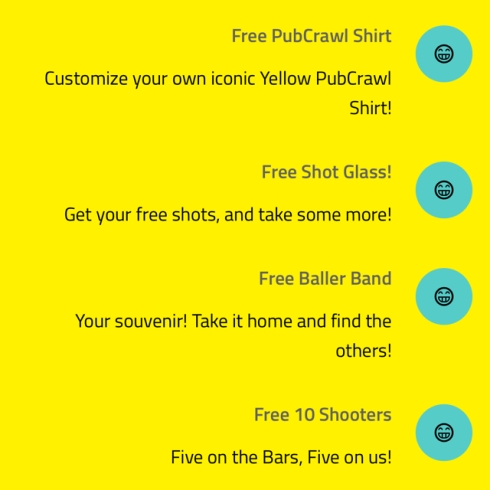 Apart from the shirt, you will also be given these items. And then once the party starts, the guide or the captain as they call it, would give you tasks to get to know people. Pubcrawl promises to #TurnStangersIntoFriends so all inhibitions and shyness must be left in your hotel room!

You will then go visit at least five bars, each giving you a free shot. With a lot of fun and games and getting to know you’s and more free shots in between haha. 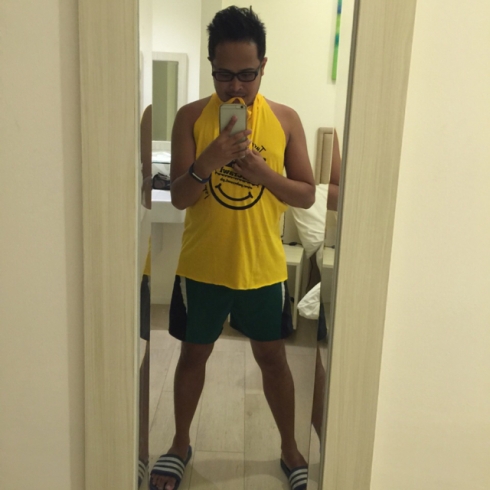 So for our pubcrawl, I asked my friend and Boracay Buddy Pam to design my shirt. Bear in mind that this was just a T SHIRT, and she’s got artistic flair that it turned out to be this pretty lol. You will see her outfit in the posts that follow. Lol.

So we went there at past 8pm, even if the call time was 7:40, because we thought they wouldn’t start on time. Unfortunately, they have already started. But fortunately, a lot of people were also late lol. The first activity was to get to know

3 new people and remember three interesting/unique things about them. It wasn’t at all hard if you’ve got a great memory, but if you’ve been downing drinks already, and you are in a sea of yellow clothes people, I doubt if you can remember them! If the captain asks you and you fail to the task, your face will be painted by a bright glow in the dark colored facepaint. Good thing I haven’t been drinking yet, so I was able to do the challenge. 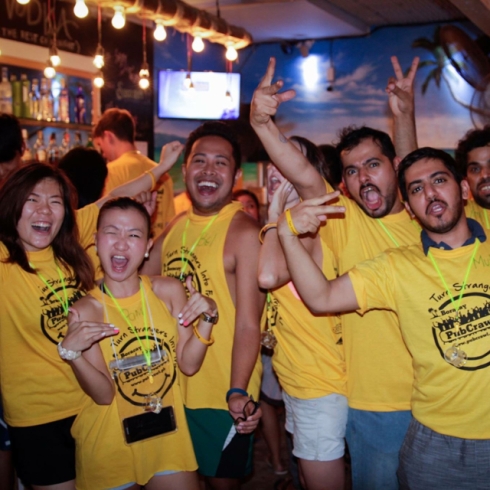 These were the first people I met, but I already forgot their names. Must be because after this first stop, I met some English people who were so fond of me (and vice versa) that we did stay with them for the rest of the night! 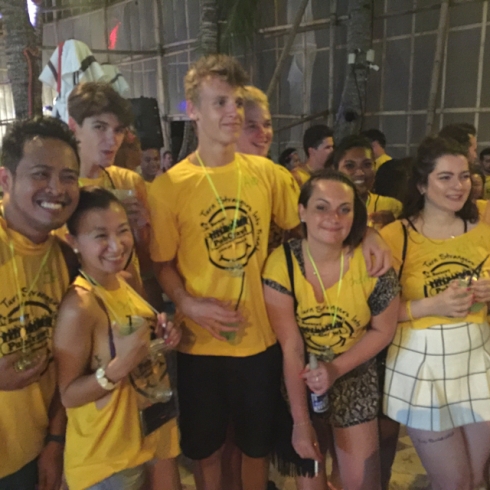 One of them is an actor in the Uk (the guy looking at the camera), and then there’s Chharlotte, a teacher; and sibilings Caidan and Kassie. After the first bar, we went to the beach to have a photo op and then headed to the next bar. I forgot what it was called, but I know it used to be Juice Bar in Boracay (drinks are slowly getting into my system). There, I also saw familiar faces from the day before – some people whom I’ve asked for a photo for my love mission. 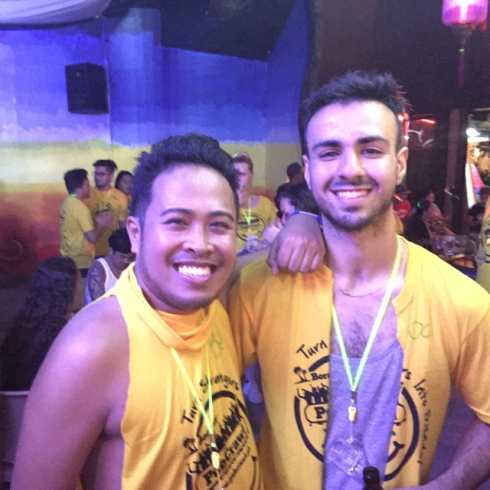 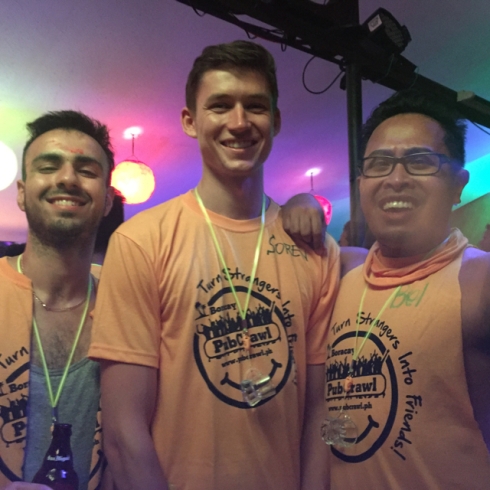 And another cute guy! 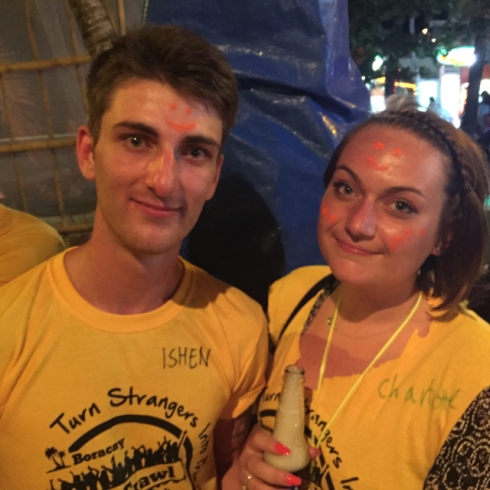 Ishen and Charlotte, both from the UK. They just met there! So much fun meeting new people! 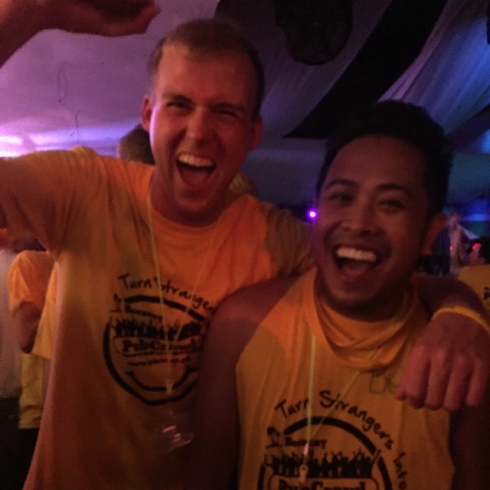 And then this guy, whom I completely forgot what he was saying to me. But I remembered he was flirting (lalalala)… 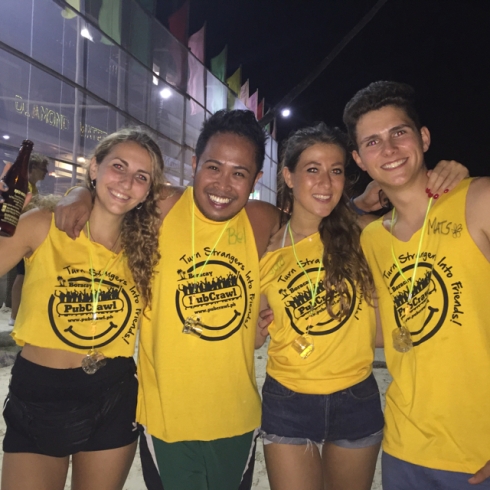 English girlfriends I asked for a Love Mission photo the day before. 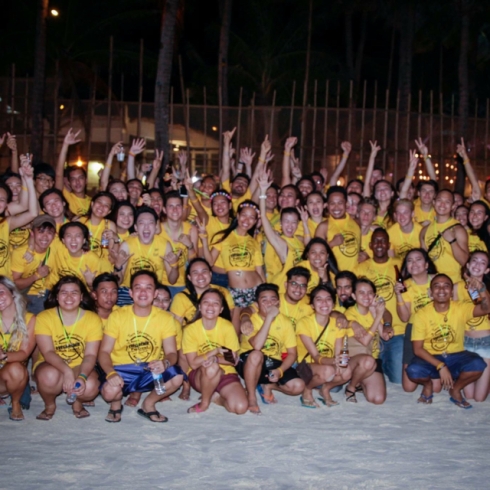 Sadly, Pam had an ulcer attack or something like that because of the Jonah’s milkshake (I’m guessing she was lactose intolerant) so we had to go home after the third bar. It was a bid disappointing for me especially when I saw the photos uploaded on Facebook. It seemed that everyone had a great time, especially when everyone else was totally wasted.

In other news, #PokemonGo has just arrived in our part of the world!!!! Okay, I am not a real fan – I just know of and am familiar with the original 130 plus Pokemons from the early 2000s. So you can say I’m one of those who are just riding with the hype. But it’s so cool and amazing and fun to do, that I already got 65 of them as of this moment! Hahaha!!! 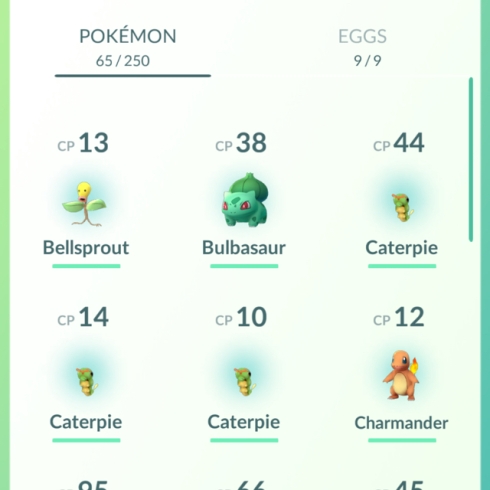 It’s a good thing that our condo is right smack in the middle of so many #Pokestops so there’s just so many of these Pokemons around!!! Hah!!!