Skip to content
Posted on May 28, 2016April 11, 2018 by clebasemaj Posted in rampaTagged dayre-exported, gay, lgbt, pride

I was supposed to go home today. But part of me wanted not to, because I saw this event invite on Twitter. It’s a discussion amongst LGBTQIA (apparently, there are more letters than I initially thought of).

So I texted my mom and told her I won’t be going home this weekend because I woke up late and I don’t like the hassle of commuting with the morning traffic. I lied, I know.

You see, deep down inside me, there’s a person who wants to belong in a community of like minded individuals.

So off I went there, bringing with me four boxes of pizza to share with the other attendees. The concept is potluck – so you gotta bring something to be enjoyed by the group.

When I came inside the venue, it was filled with lesbians. And so I thought, uh oh, am I in the right forum? Was there A “lesbians only” theme that I missed?

Luckily, there wasn’t any. Soon after, more participants came in – a few gay people, a bisexual, a transgender and an asexual (gasp! I honestly never thought that

The discussion was light, it revolved around discrimination, homophobia, where the community is right now and what needs to be done.

I won’t go into detail as it was supposed to be a safe environment where nothing discussed has to come out without the consent of the participants.

But since it was my first time to attend it, I’ll just give my observations? I guess that’s reasonable? 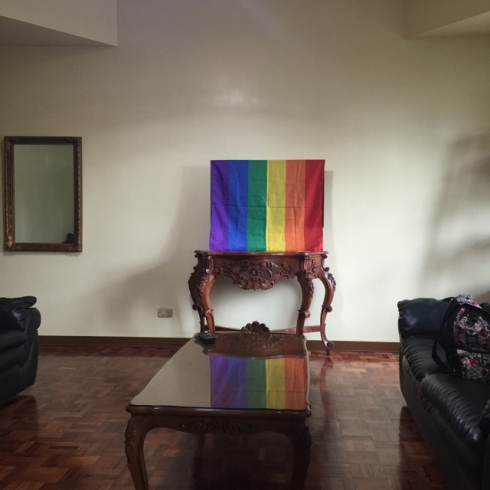 At the beginning of the program, we were asked to write down the first thing/s that came to our minds when we heard the words Lesbian, Gay, Bisexual, Transgender and Asexual.

We all did as told, and surprisingly the words associated with these terms were mostly negative (like for Gays – hairdressers, loud, comedy etc). So it was revealed that even within the community, there is a stigma.

A stigma is the initial negative concept or belief that a person holds about something.

on the other hand, is when you act upon that stigma. Suppose I thought that Lesbians are butch, only capable of blue collared jobs. That’s my stigma.

And if I work in the HR Department and I see a lesbian applicant applying for a managerial position, I would immediately reject the application because of my belief that she should be in a more masculine / muscle needing job. That is discrimination.

Where are we now?

The Metro Manila Pride, together with all participating LGBTQIA groups, are pushing for the passing of the Anti Discrimination Bill in the Philippines. It’s supposed to protect people like us, and give us some rights that we also deserve (I’m / They are not talking about same sex marriage).

First and foremost, homosexuals are not mentioned in the constitution in a positive light. Everything is about men and women. The only mention about homosexuals is it being grounds for annulment.

Or it being a fraud, or misrepresentation of one’s self.

The LGBT activists are pushing for inclusion – one I have also mentioned in my @blog post during #Idahot .

We are paying the same taxes, so can’t we at least deserve the same rights?

I was unusually quiet during the entire thing. I realized that’s my default setting in a new environment, in the company of people I do not really know. My fake self confidence went down the drain, lol. I’m perky and friendly when I have a backup friend or wingman (if we’re in a club setting). But yeah, I guess my default was put on some walls first and do not be too bubbly. I’ll warm up to them soon.

I was whatsapping my transgender friend in SG, telling her how weird I felt coz everyone

spoke coño (Rich college kid) English, and she advised me not to mind them. They may just be working in call centers, and some might just be there to brag.

True enough, there were some people in there whom I felt went there just to say that he is this and that and he has done so and so. People were telling that they graduated from this and that and all that shit, but really.. We don’t need that. And then they went to religion and debated as well as to which one is better or more accepting

and tolerant.. This is just a proof that you should never talk about religion on the first date!!

Inside, I was thinking: why do these motherfckers talk about being super entitled when they only brought one and a half dozen of doughnuts?? That’s just equivalent to half the price of one box of pizza (and I brought four, hello). Lol. But really, I do not know if it’s another form of wall that people build whenever they’re in a new group – that they have to build themselves up in such a way that

they’d be looked at as almost perfect human beings and that people should gravitate towards them because of that.

You may find this hard to believe, but I realized that I’m not really wired like that. While I like the attention, and fame, I usually stay in the corner and take time to warm up to a group. It would take (at least) two meet ups for me to be cozy enough to reveal my true colors. But once I’m in that level of confidence, I’m unstoppable lol.

So there – that was how my day went.. I’m gunna read some of the posts of the people I follow, Hopefully not fall asleep
While
Doing that… And afterwards, I’m off to dreamland… Goodnight #DayreFriends